A one of a kind initiative by True Event India. We Organize the asthi visarjan in india at Haridwar(Har Ki Pauri). We also cover entire event with Video Recording and we organize the event as per hindu customs and ritual.

Asthi-visarjan [अस्थि-विसर्जन] is a very important religious ritual in the Hindu religion. Asthi means the left over bones and some ashes of a dead person collected after performing the last rites. In the Hindu religion a dead person is cremated normally on a Funeral pyre where the dead body is placed on logs of fire. Now days Electric or Diesel Crematoriums are also used as they are found in most Indian towns..

After the last rites are performed the remains of the dead person are collected, these are mostly tied in a peace of cloth. These ashes are then immersed in a clean normally flowing water body like a river. The practice of immersion is known as Asthi-visarjan. This practice is a must for all Hindus.It is commonly believed that immersion of the ashes in the river Ganga is most sacred. Hence many devote Hindus do the immersion ceremony at places like Haridwar and Varanasi. And also places like Nashik situated on the banks of the Godavari River. There are many other places which are also considered as sacred locations for the Asthi-visarjan ceremony.

We Organize the Asthi Visarjan in India at Haridwar ( har ki pauri ) we also cover entire event with Video Recording and we organize the event as per hindus customs and rites and ritual. We specially works on behalf on all hindus which are living across the globe. You can send asthi kalash at our site. ( We Organize Asthi Visarjan Ceremony In India at Gangey ) You Have to send us “Asthiya” and we will Do it on your behalf in india.

Why You Need Us :

Sometimes Due to their Personal reason ( time , health and financial )Peoples are not able to do it itself .  so we do that on their behalf as like them .

As per our Religion rites ..its fully acceptance by our god or beloved

What We Require : Details .. 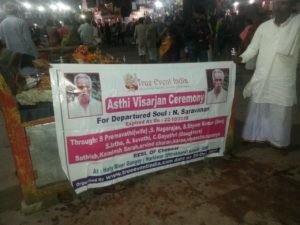 How We are Diffrent?

Our Team Do It Personally in presence of Our Priest and Supervision ,

Talk to our spiritual experts to let them know your preferences.

Send Asthi kalash to the provided address  in India

We will carry out the asthi visarjan process in haridwar

We will share the video of the entire visarjan process

Or Mail Us at :
help@trueeventindia.in

Disclaimer :  Astrological results are dependent on a lot of factors and the results may vary from person to person. Please read the disclaimers and rules carefully.